Laylaa F Saad began an Instagram challenge called #MeAndWhiteSupremacy where she encouraged people to own up and share their racist behaviours, big and small. Thousands of people participated and from this project the Me and White Supremacy book was born; with added historical and cultural contexts, stories, anecdotes, definitions, examples and further resources. The book leads readers through a journey of understanding white privilege and their participation in white supremacy so that they can stop (often unconsciously) inflicting damage of black, indigenous and people of colour (BIPOC) and in turn, help other white people do better too. It is clear from the onset that this work will be uncomfortable, painful and necessary. Even if you already have an understanding of white fragility, cultural appropriation, and tokenism, methodically working through and examining your own complicity in them is another thing entirely. This is essential work for all white people.

White privilege – inherent advantages possessed by a white person on the basis of their race in a society characterized by racial inequality and injustice
White supremacy – the belief that white people constitute a superior race and should therefore dominate society, typically to the exclusion or detriment of other racial and ethnic groups, in particular black or Jewish people
White fragility – discomfort and defensiveness on the part of a white person when confronted by information about racial inequality and injustice
Cultural appropriation – the unacknowledged or inappropriate adoption of the customs, practices, ideas, etc. of one people or society by members of another and typically more dominant people or society
Tokenism – the practice of making only a perfunctory or symbolic effort to do a particular thing, especially by recruiting a small number of people from under-represented groups in order to give the appearance of sexual or racial equality within a workforce

In light of the BLM protests, a friend of mine set up a book club for us to explore this book. As a group, we decided to meet weekly and share our journaling responses to the chapters. Saad sets out the most effective way this can be done as a group to ensure that it is a safe space for sharing. Before starting work, I genuinely thought that racism was negative words and actions said and done towards black and people of colour. I believed that I hadn’t ever been racist because I had never acted in this way. I didn’t think I really had any work to do around racism because I was a good person who believed everyone should be treated equally. Working through this book taught me just how wrong I was. I had limiting beliefs, I had unknowingly benefited from my white privilege, I had tone policed people of colour and I had been a performative ally. Responding to the questions posed by Saad made me go deep into my childhood – growing up in a Cornish town where there was one person of colour in my whole secondary school, challenge my behaviour when dating black men in the past and acknowledge where I have disregarded the experience of black, indigenous and people of colour.

Something that becomes very apparent through the book is the need to call out/in friends, family, colleagues, random strangers when you witness behaviour that needs to be challenged. This is something that I never thought I’d be able to do. I’ve heard problematic comments and I have been silent. Doing this work in a group setting gave us the chance to talk through real life experiences and workshop the best ways to respond whilst also exploring how they may respond to your actions (white centering/fragility). Putting this into practise is hard but isn’t comparable to the hard shit that BIPOC have to go through as a result of my and other white people’s actions. I finally feel like if I lose people as a result of calling them in/out then c’est la vie.

I’ll be honest – the work was hard and at times I wanted to give up. I felt apathetic & then there was a chapter about white apathy. Saad totally hits the nail on the head when she says that it is absolute white privilege that we get to opt out of this work when we want to and disengaging cannot be an option. I felt proud when we completed the 28 days but knew that this wasn’t where the work finished, it is where it begins. We were asked to list our actions that we would be taking forward over the next 2 weeks and beyond and committed to holding each other accountable. There is so much that we can do with our money and time to support BIPOC and we have to do that over and over again. It is baffling how many people/companies shared social media posts in solidarity during the BLM protests and have since been silent. It is not up to BIPOC people to tell you what you can do or how you can help. This shit is on you. 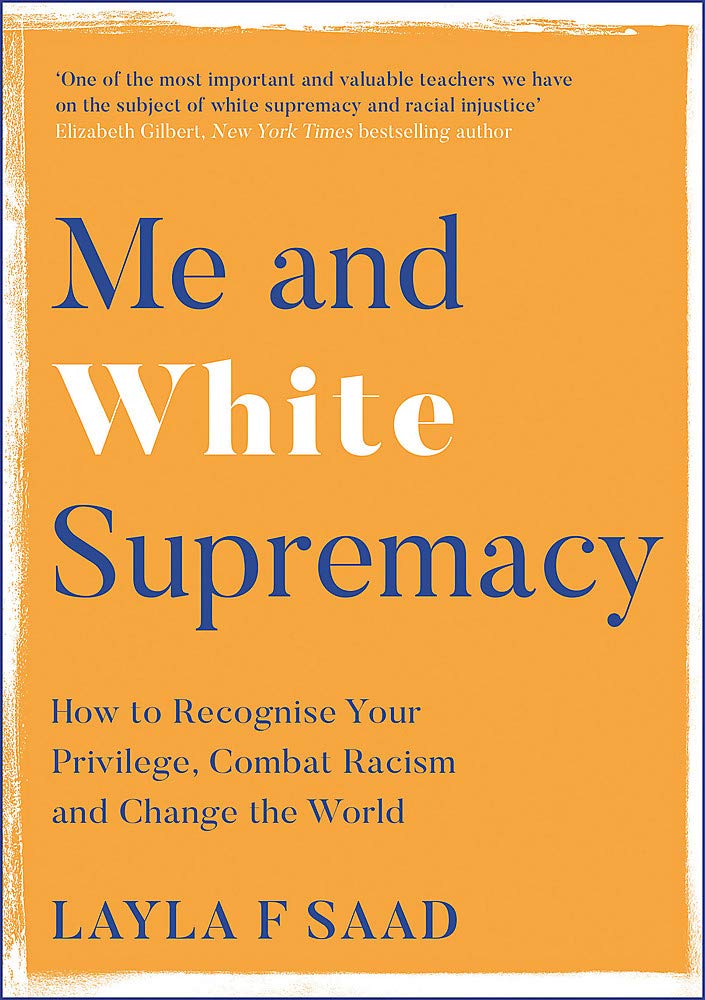